One of the major approaches for blockchain scaling is the use of sharding. In essence, splitting up a single chain into smaller chains which then execute in parallel. Per-chain transaction throughput may remain the same but the overall aggregate throughput is massively increased.

Sharded chains come in roughly two flavours: heteregenous and homogenous. I want to briefly consider the tokenomics of these two flavours and how they stack up against each other in that respect.

But first, a quick intro to each type.

Note: "sharding" as mentioned here refers to the usage of this term with respect to Blockchain protocols rather than the classic database-related usage.

Cosmos and Polkadot are examples of projects building heterogenous sharded chains. In Cosmos the network architecture looks something like as follows: 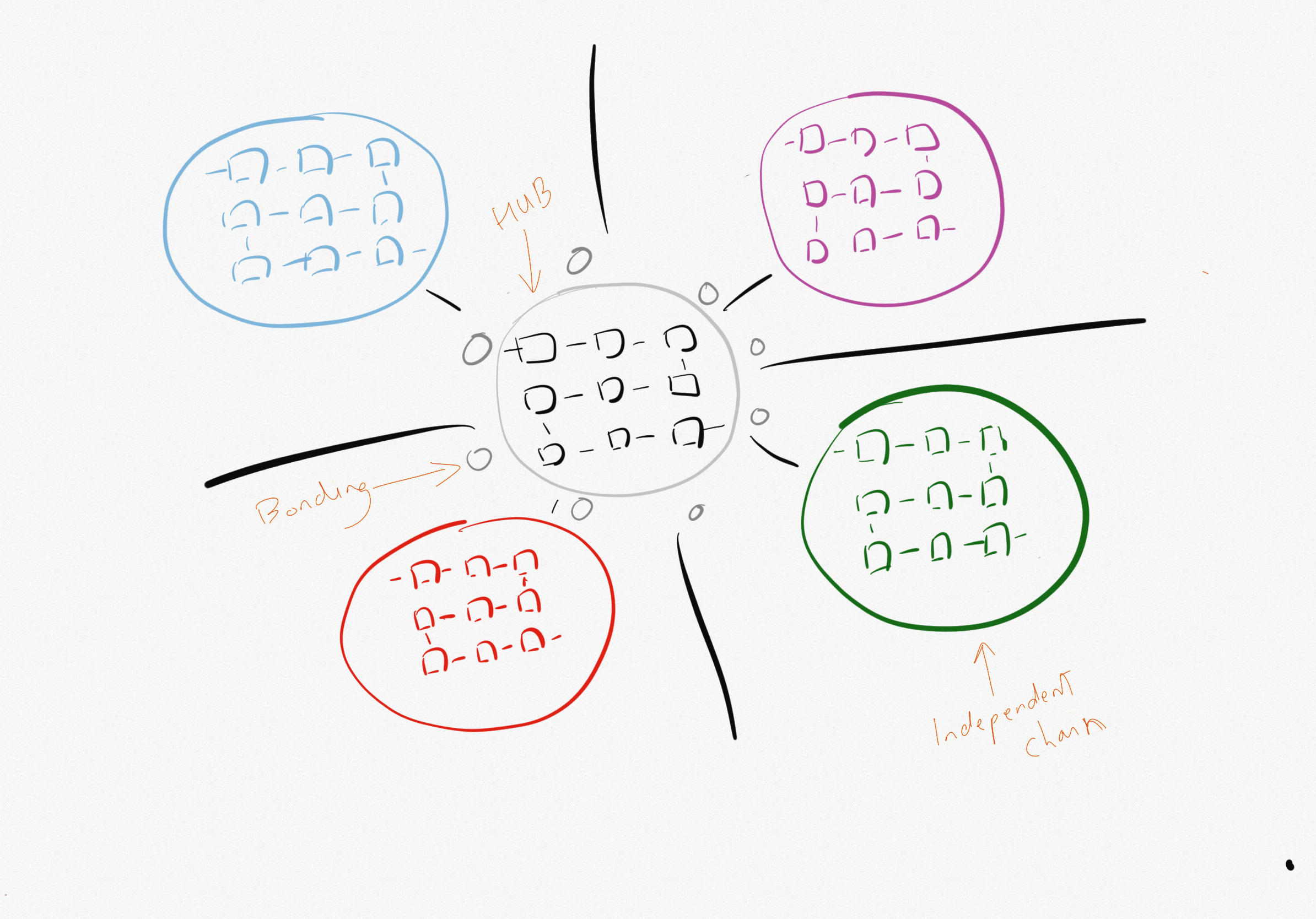 As shown above, each shard in Cosmos is actually an independent blockchain with its own set of validators/miners. These shards could communicate directly with each other, but the system is designed such that there exists a hub chain whose sole purpose is to facilitate this inter-chain communication. The hub chain has its own validator set and does not have any bearing on the operation or functionality of the shards connected to it.

The Cosmos team run a hub known as the Cosmos Hub. Each chain that wishes to connect to this hub must stake ATOM (the native token of the Cosmos Hub) as a security deposit.

In Polkadot the structure is similar, with a few key differences. Each shard - known as a parachain¹ - is a blockchain that has been built using Polkadot's SDK, meaning that all shards must share a common consensus and networking architecture. Furthermore, there is a single global validator set which is shared among the shards - a new shard that wishes to join the ecosystem can do so without first needing to find its own set of validators.

In Polkadot the hub chain is known as the relay chain, and there is only one of these. Just like in Cosmos, the relay chain facilitates inter-shard communication². And in order for a shard to exist and be connected to the relay chain it must stake DOT (the native token of the Polkadot relay chain).

One final difference is that in Polkadot the shard blocks are in effect "notarised" in the relay chain's blocks, making it behave more like a homogenous sharded chain. However, just like Cosmos, each shard has its own native currency, governance structure and unique functionality that can be different from all the other shards.

Examples of homegenous sharded chains include Ethereum 2.0, Elrond and NEAR.

Although homogenous shards have a similar overall structure to heterogenous shards, there are some key differences. 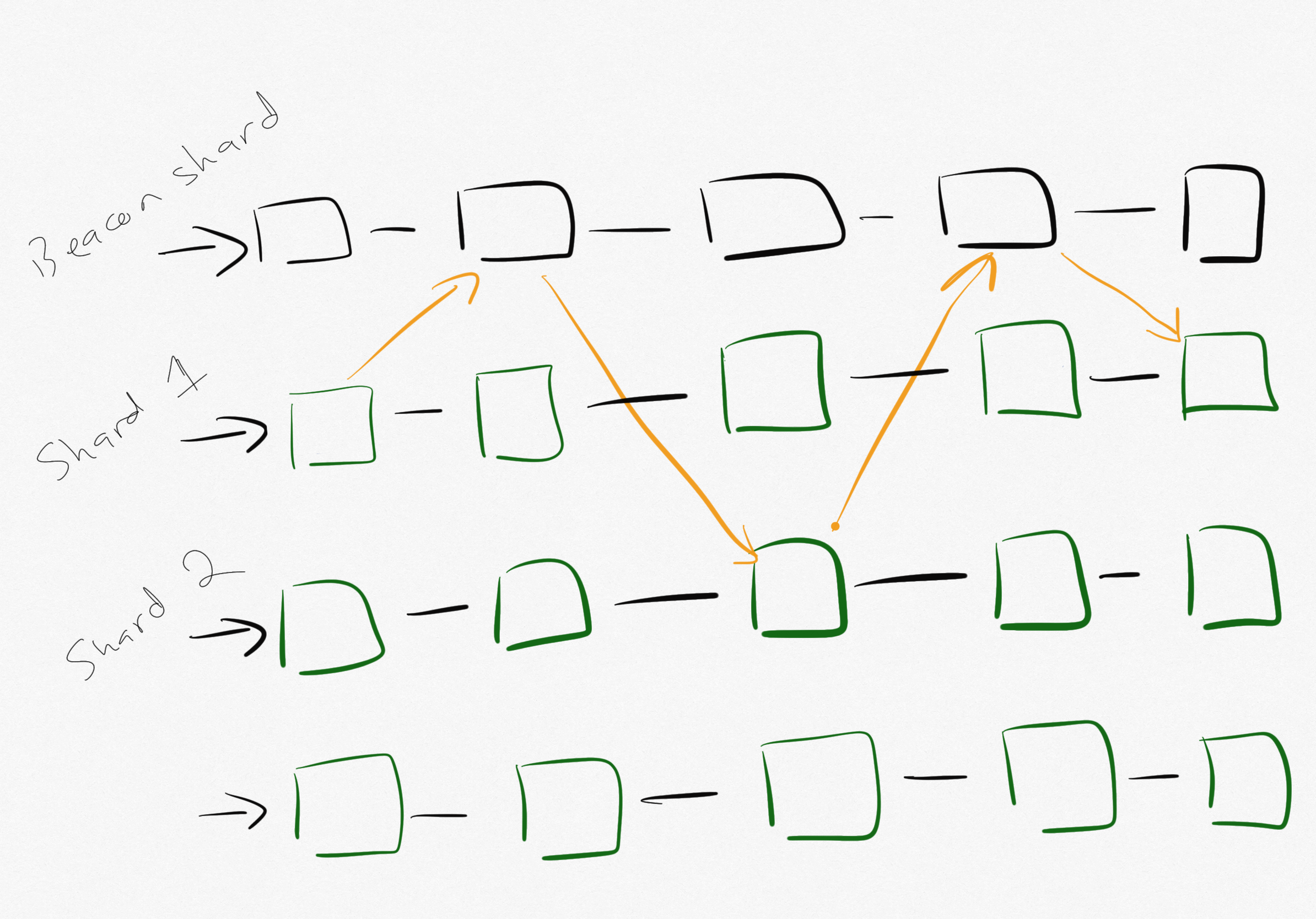 The shards move forward in a synchronized fashion, with the beacon shard (equivalent to the Cosmos hub or Polkadot relay chain) setting the rhythm. Inter-shard messages typically must travel through the beacon shard in order for atomicity to be adhered to. Also, the entire chain has a single native currency which all the shards use, and they all support the same smart-contract languages and architecture.

There is a global validator set and validators get rotated between shards in order to minimize the risk of a malicious takeover of a shard. Note that unlike in heterogenous chain, the takeover of even a single shard would be more devastating for the chain as a whole since the shards are much more tightly integrated with each other.

Because the validator set is global and shards are interdependent and tightly connected there is no need for an individual shard to stake any tokens with the beacon shard in order to be connected to.

It's clear that homogenous chains have more a top-down command and control system than do heterogenous chains.

Now we get to the interesting question - in the long run, which chain is going to accrue more value (i.e. capital locked)? And importantly, from an investment point of view, which type of sharded chain's native currency is going to have the larger market capitalization?³

Both types of sharded chains are scalable enough to accomodate 1000's of transactions per second, so one could argue that it then comes down to the types of dapps which get built and the ability to attract capital. Direct marketing tactics aside, this arguably comes down to the strength of the developer ecosystem and the initial set of primitives. As has been witnessed with Ethereum, a strong developer ecosystem and a good set of primitives leads to a flywheel effect bringing in even more developers and dapps at the expense of other chains.

Since it's impossible to predict the above for any chain let's instead consider the economics of a chain's native token purely from its use within the the chain itself.

Having said that, validators on the main shard will need to stake tokens for security purposes. And since the more tokens staked the more secure the network is, non-validator users are encouraged to delegate their holdings to validators in order to further enhance network security. Both validators and delegators are incentivized to do this via staking rewards. The better the staking rewards offered by the chain the more demand there will be to stake and delegate, and thus the more demand there will be for the native token. In fact, since staking rewards are a common factor in all proof-of-stake chains, reward rates need to be competitive in order to attract as much capital as possible.

There is an additional demand for the token when adding new shards to the chain. Every shard must stake a quantity of tokens with the main shard in order to be part of the larger chain. Demand is thus maximized if a large no. of shards are created - perhaps if each dapp runs on its own shard. However, keeping in mind the benefits of composability, it is likely that that there will be shards which support generic smart contracts, allowing for many Dapps to run on a single shard, similar to Ethereum 1.0 today. Indeed, this already seems to be the case.

Thus, the greatest demand for the native token in a heteregenous sharded system will come primarily from staking and delegation needs⁴.

The key difference with homogenous chains is that the native token is used throughout all of the shards to pay for transaction fees. Thus, beyond the potential rewards from staking and delegation there is a constant demand for the native token driven by the need to transact on the chain.

As a result, in a homogenous chain, as chain utilization increases, demand for the native token automatically increases.

And given that the majority (if not all) of the transaction fees go to validators, increased chain utilization results in increased earnings for validators (and for those delegating to them). This has the interesting consequence of validators seeing it as in their self interest to increase the network utilization rate as much as possible. And as the network utilization rate increases, the demand for the native token increases, thereby putting upward pressure on the token price. This results in validator rewards and transaction fees increasing in value, thereby attracting more validators to the network and thus contributing to increased network security and scalability. In effect, a positive flywheel effect is created⁵.

Thanks to Jeff Lau for reviewing.

¹ Polkadot also allows for parathreads which are a bit like pay-as-you-go parachains.

² A peer-to-peer protocol which skips the relay chain is currently being developed.

³ Market cap - or better yet, Fully Diluted Valuation (FDV) - is always a better measure of value than token price since tokens are denominated differently.

⁴ In Polkadot the DOT token is also used for governance voting but based on the engagement levels we've seen with existing governance tokens (e.g. COMP, UNI, etc) I don't expect this to be a huge driver of demand unless the chain becomes as popular as Ethereum.

⁵ In Elrond there is even a cap on the token supply. The tokenomics are set up such that the staking and delegation rewards tend to 0 over several years and eventually transaction fees are the only means through which validators will earn rewards.